Bette Midler founded New York Restoration Project in 1995 by picking up trash in a park. 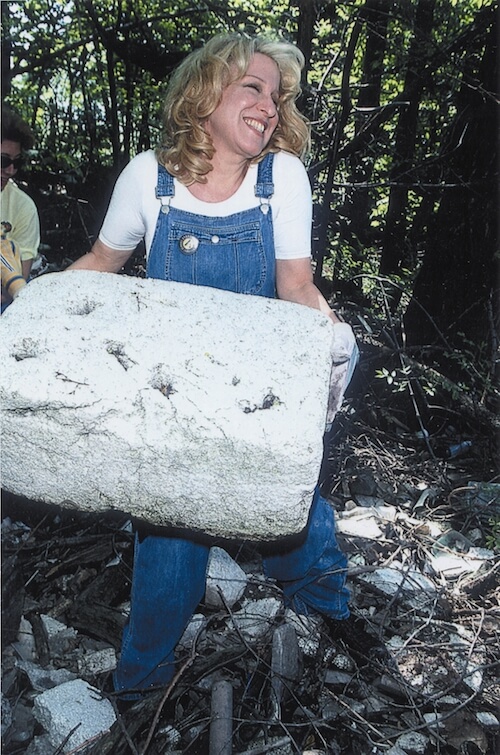 Since then, we have evolved into an environmental justice nonprofit and citywide nature conservancy preserving community gardens and other green spaces.

Our efforts not only improve the physical environment, they support and strengthen community. For over 25 years, from the transformation of long-neglected parks to the historic MillionTreesNYC partnership to restoring the Harlem River shoreline, NYRP has set the standard for citywide greening efforts.

In 1995, New York City experienced a revolution that would change its landscape for the better. Returning to the city that helped launch her celebrated career, famed entertainer Bette Midler found many of its streets, neighborhoods, and parks consumed by a sea of litter and years of neglect. Appalled at the state of open, green space, Bette recruited friends and family to remove garbage from Fort Tryon Park and Fort Washington Park in northern Manhattan. 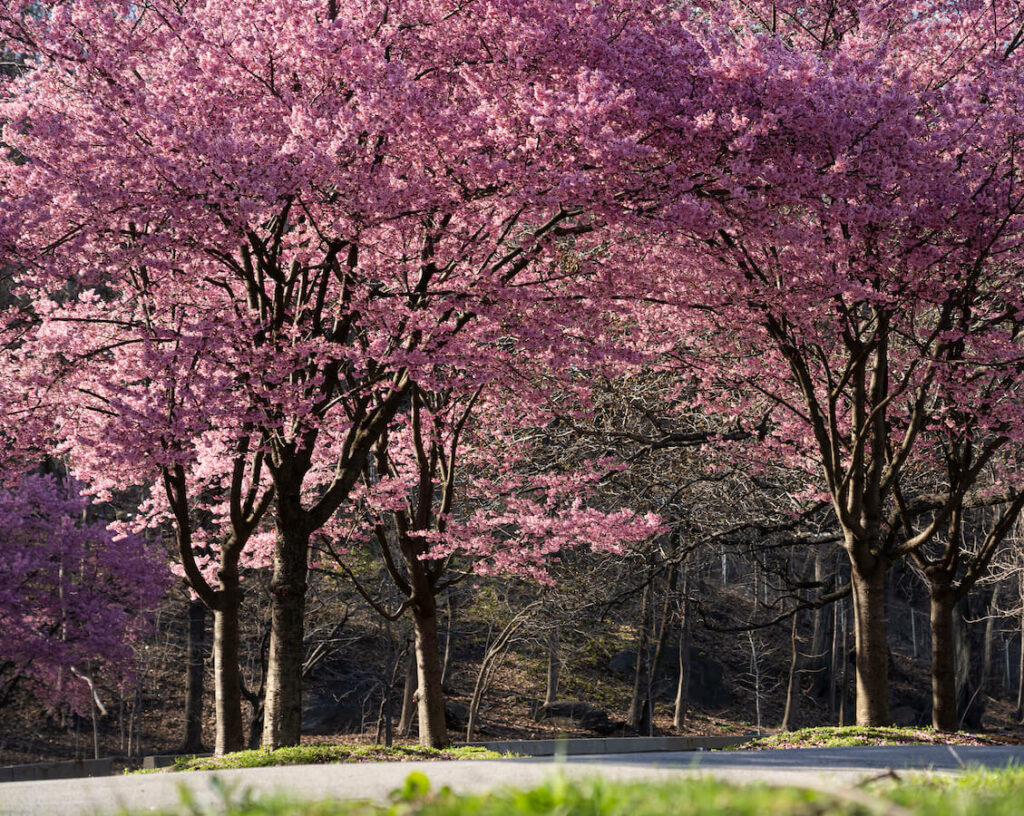 Cherry blossoms in bloom along the Harlem River Greenway.

A year later NYRP also took on the task of meticulously clearing out and cleaning up Sherman Creek Park in Inwood, transforming an illegal dumping ground along the Harlem River into the beautiful, five-acre Swindler Cove. That same year in Highbridge Park, NYRP crews and volunteers partnered with the New York City Department of Parks & Recreation to uncover more than four miles of pathways that had been buried under accumulated garbage and debris. They removed abandoned automobiles, 8,000 tires, and 481 tons of trash. Today, NYRP continues the environmental restoration and daily maintenance of both parks.

Early on, NYRP recognized the significance of the Harlem River to the neighboring community. After clearing a pathway to access the river, NYRP built and opened the Peter Jay Sharp Boathouse in June 2004. The boathouse is now home to our non-profit partner, Row New York. 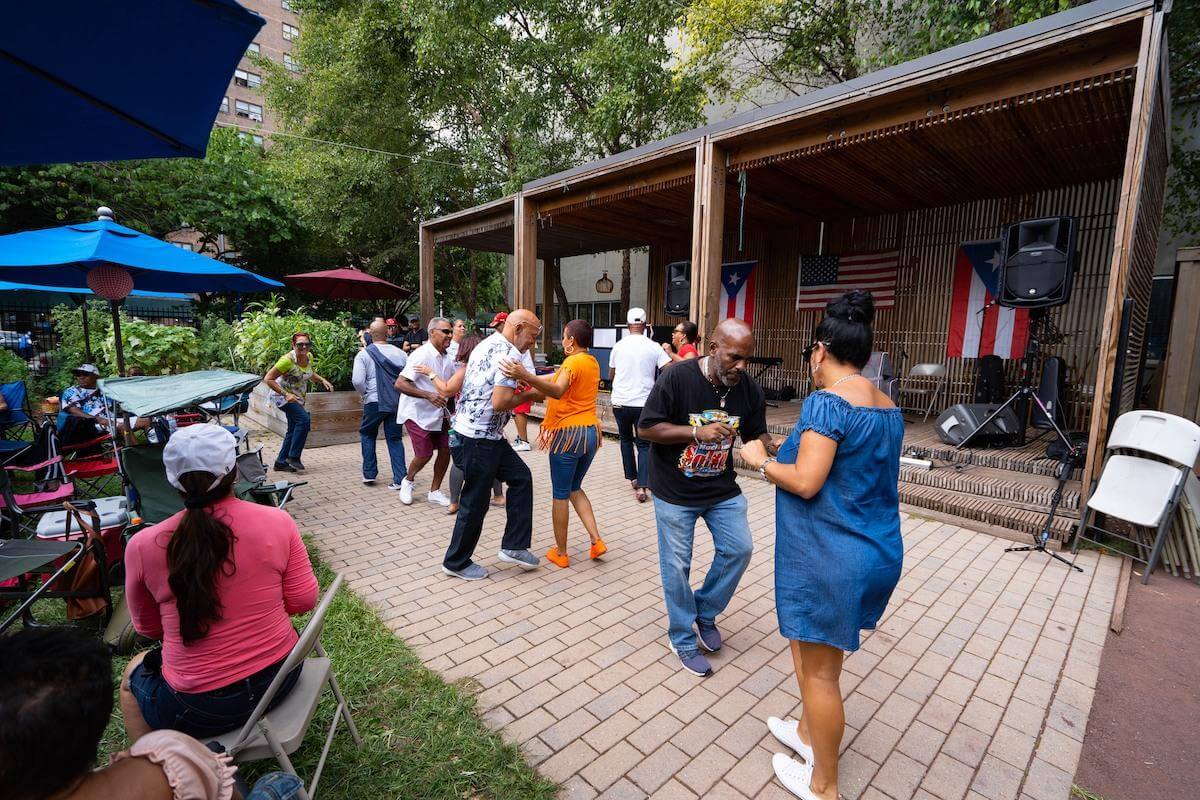 An end of summer celebration at Willis Avenue Community Garden in The Bronx.

In 1999, New York City Mayor Rudolph Giuliani announced plans to sell 114 community gardens to developers. NYRP quickly rallied and raised the money necessary to save these precious plots. Collaboration with the Trust for Public Land and other like-minded non-profits ensured that these community treasures would remain public gardens in perpetuity.

NYRP now owns and manages 52 community gardens throughout the five boroughs and works every day to promote the revitalized health of the neighborhoods the gardens serve. These spaces provide New Yorkers with room to grow fresh and nutritious food, exercise, take children out to play, and safely connect with friends and family. They have also been venues for NYRP’s environmental education programs over the years, becoming outdoor classrooms and vibrant resources for many local schools.

Most of the gardens have been renovated from the ground up to become state of the art green spaces designed in partnership with the surrounding community. In 2019, Vital Brooklyn Initiative funds from New York State provided critical capital upgrade support in multiple gardens, including adding water supplies and making garden infrastructure more accessible. 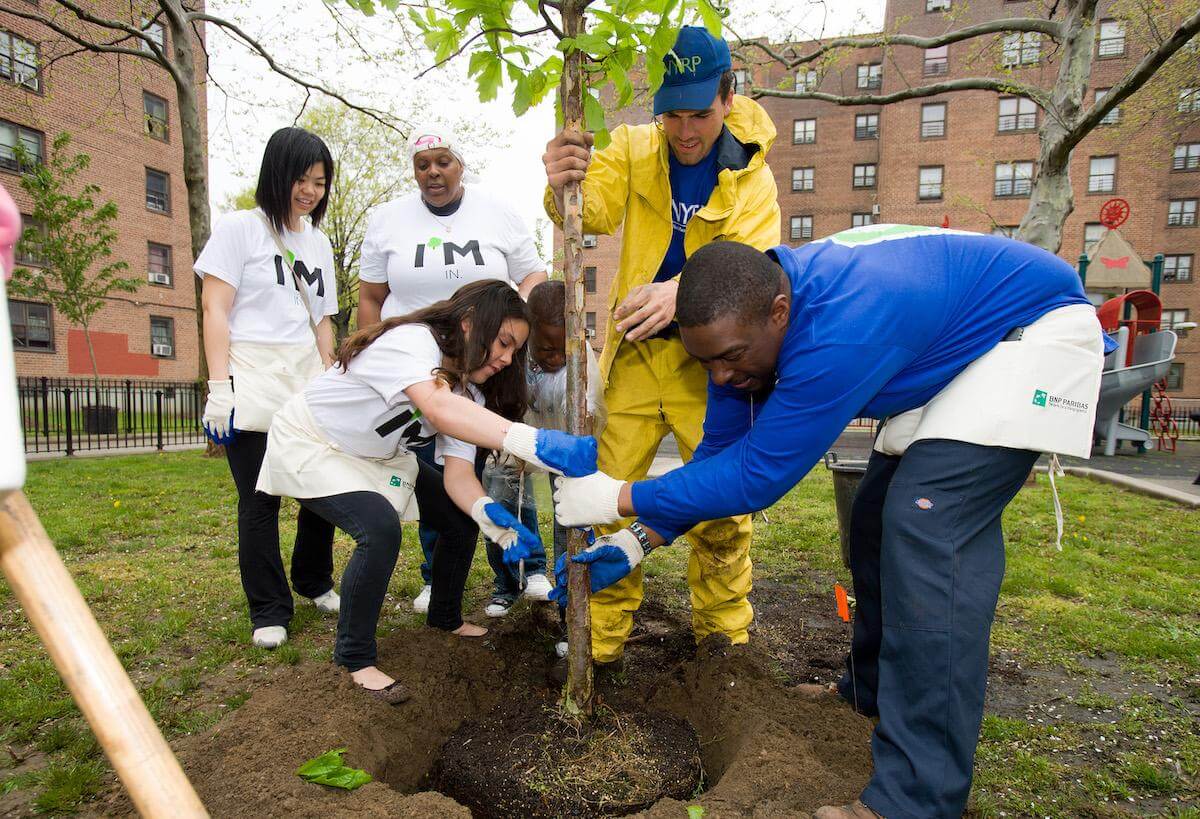 Community members and 5th grade volunteers planting 100 trees in The Bronx in celebration of Arbor Day.

A cornerstone of the plan, MillionTreesNYC was formed to revitalize New York City’s urban tree canopy by planting and caring for one million new trees throughout the city. To accomplish this ambitious goal, NYRP joined forces with Mayor Bloomberg and the New York City Department of Parks & Recreation, and became a co-leader in MillionTreesNYC.

While Department of Parks & Recreation and other municipal agencies planted along city streets, in parks, and on public rights of way, NYRP focused on two primary tactics: providing free trees to New York City home or land owners; and directly planting trees alongside corporate and community volunteers in parks, school yards, public housing properties, and other public spaces.

MillionTreesNYC became a citywide movement that engaged and energized New Yorkers of every background. The millionth tree was planted in October 2015 in The South Bronx, completing this historic effort.

GARDENS FOR THE CITY 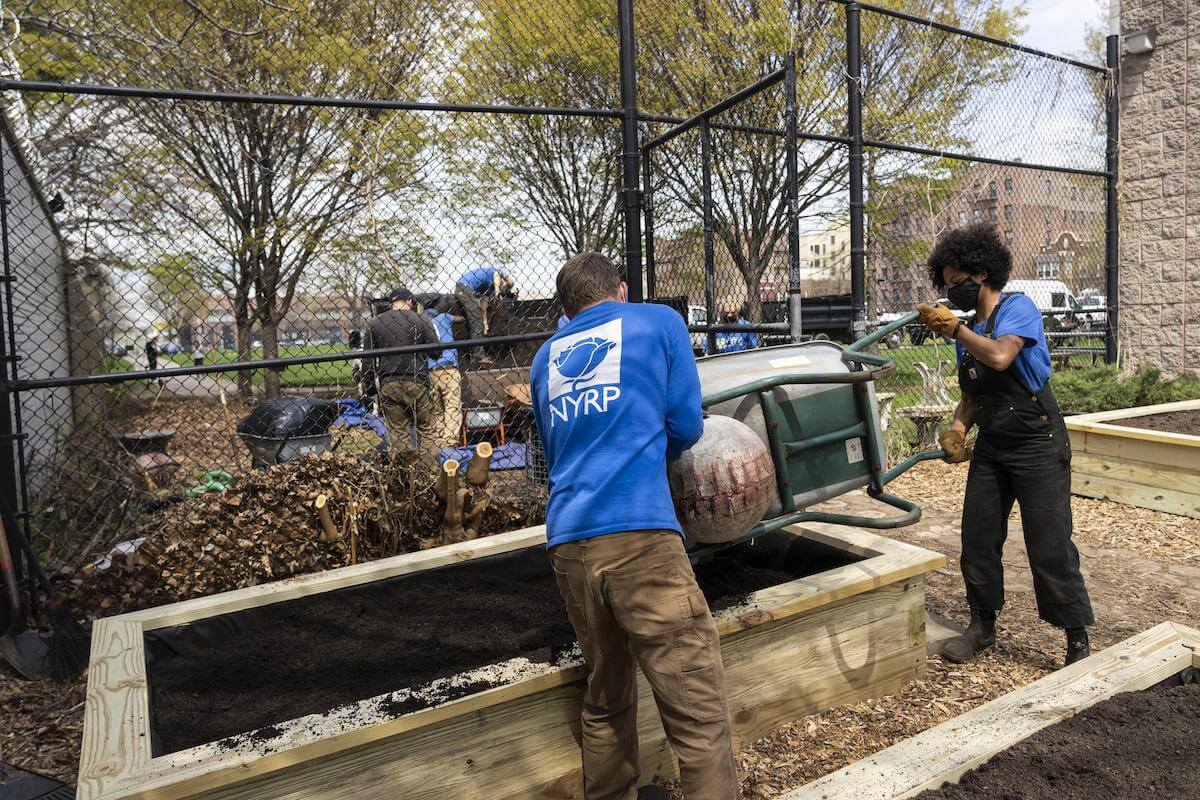 NYRP’s Garden for the City team fills raised beds as part of a garden renovation at Hunts Point Recreation Center in The Bronx.

Over the years, as NYRP deepened its work in the neighborhoods surrounding our community gardens, our staff collaborated informally on greening projects with many likeminded local partners. In 2011, NYRP formalized this support network with the creation of our Gardens for the City program. Since then, we have helped build over 350 gardens and shared green spaces citywide.

Through Gardens for the City, NYRP provides materials, horticultural knowledge, and labor to transform underutilized spaces into flourishing gardens. Our partners have included schools, community centers, assisted living facilities, houses of worship, GreenThumb gardens, New York City Housing Authority properties, and many more. Groups interested in collaborating with NYRP on an open space transformation are invited to learn more about the Gardens for the City program and submit an application here.

Sherman Creek Park is a cornerstone of the Inwood neighborhood that, like so much of New York City, is threatened by climate change-induced erosion and sea level rise. We’ve been researching ways to protect it for years and 2020 was when we introduced an ecosystem-based solution called a living shoreline.

Integrating native plantings and an artificial oyster reef, our living shoreline design aims to not only attenuate waves that wash away sediment but also enhance the native wetland habitat—one of the last of its kind in all of Manhattan. By stacking specialized concrete blocks called Oyster Castles, its design helps build new habitat for marine species that, over time, could transform the dynamics of a park that we might otherwise lose.

We continue to monitor the shoreline’s evolution to better understand and quantify the ecosystem services that urban wetland restoration projects like ours might offer. 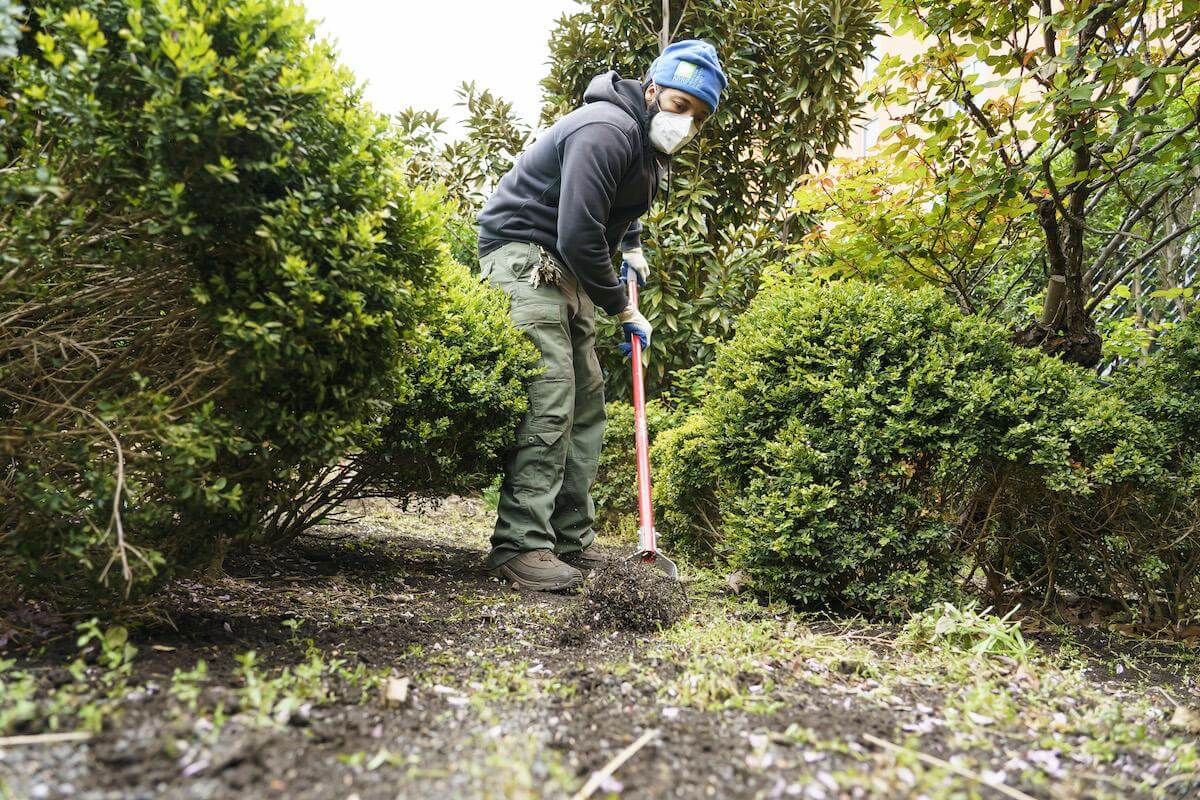 Our Operations team maintained our parks and gardens while following all COVID safety precautions.

When COVID-19 hit in March 2020, priorities across the organization shifted immediately to protect the health and safety of our staff, partners, contractors, and communities. With stringent public health protocols soon in place, our crew began the spring season as truly essential workers responsible for stewarding 52 parks and gardens across all five boroughs. We’ve always known our work’s value, but almost overnight, it became vital for a city on lockdown.

Despite the tremendous hurdle the pandemic presented for the city, NYRP rose to the occasion to have one of its busiest and most successful years to date, supporting our gardeners to grow over 90,000 pounds of fresh produce, building close to 20 new gardens throughout the city, and reintroducing an oyster reef to the Harlem River. You can read more about our COVID-19 response here.

Read our Annual Report to learn how we adapted to meet the one of the greatest needs for clean, green open space that our city has ever had.