Reviving an Extinct Tree in One of Manhattan's Last Forests 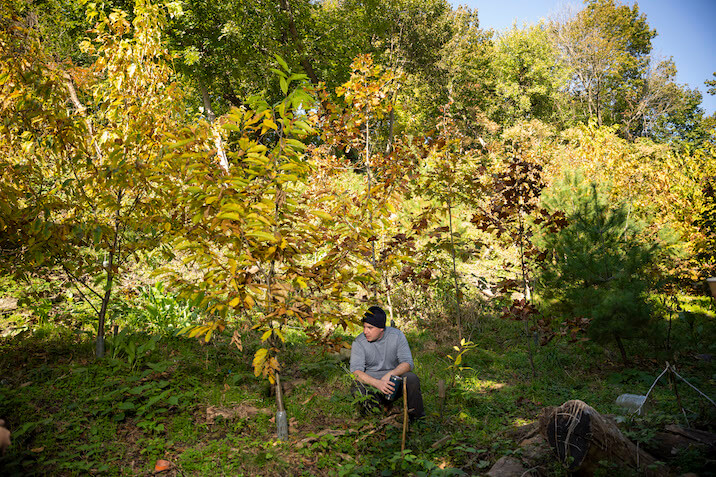 At New York Restoration Project, we have planted 300 hybrid American chestnut trees in Highbridge since 2017 in partnership with the New York City Department of Parks & Recreation. The endeavor is the largest urban experiment of its kind in the country and part of a larger movement to help restore the American chestnut to its historical range. We hope to participate in the tree’s rebound by monitoring and documenting how the hybrids grow in the park over time.

The American chestnut was one of the most abundant and productive trees in the country before the emergence of the chestnut blight, a fungal disease that kills the trees’ leaves, flowers, and stems. (Coincidentally, the blight was first discovered just across the Harlem River from Highbridge in 1904 at The Bronx Zoo). Scientists estimate there were 4.2 billion chestnut trees in the Eastern United States before the blight hit, making it a critical part of forest ecosystems. It was also a prized as a source of food and timber.

“We don’t know a lot about these trees because by the 1940s they were gone from our forests,” explains Rich Hallett, an ecologist from the U.S. Forest Service and our primary research collaborator on this project. “We know that the tree grew in a wide range of environments, so we think it could be adaptable to urban conditions,” explains Hallett. The hope is that the restoration efforts taking place in Highbridge can help fill in some gaps.

Our partners at the American Chestnut Foundation (TACF) have been instrumental in reintroducing the species by creating the hybrid variety that combines the blight resistance of the Chinese chestnut (a genetic cousin) with the original American species through traditional breeding practices. TACF has planted select hybrids in over 40 restoration trials in mostly rural areas across the Eastern United States where they study if the hybrids have sufficient blight resistance and competitive ability to survive. 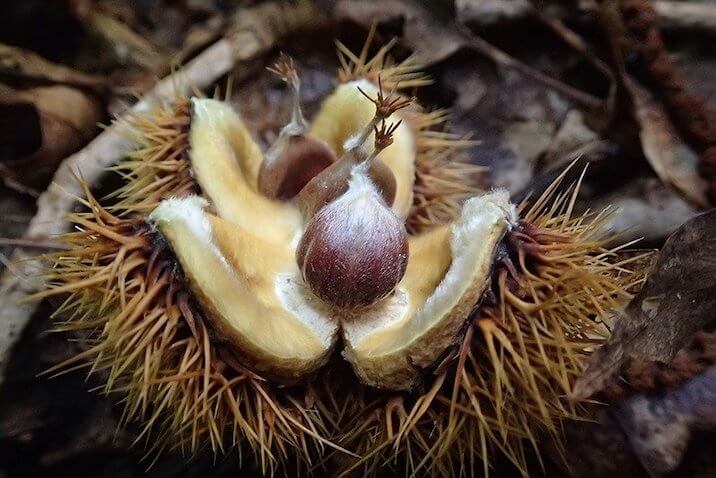 An open bur with a chestnut at the center. Photo courtesy of the American Chestnut Foundation

There is limited research on restoration in highly disturbed urban settings like Highbridge, however, which makes our trials especially unique. While there have been smaller demonstration plantings of the American chestnut trees in cities such as Boston, Pittsburgh, Philadelphia, and Washington DC, the restoration project happening in Highbridge is the largest of its kind.

“The Highbridge planting is unique in its purpose and its extent setting the stage of not just, ‘Hey, here’s a chestnut, isn’t that cool?’ But really, let’s make it a part of this urban forestry community,” explains Sara Fern Fitzsimmons, Director of Restoration for TACF. “Urban forestry has been around for a long time, but urban forestry in the realm of restoration of tree species is new. This is a unique and innovative project that NYRP is putting together, and I can’t wait to see it blossom into other similar work.”

On the ground, our crew performs routine health assessments on the trees, keeping track of things like the height, diameter, and how the trees’ leaves photosynthesize. Additionally, our crew works hard on invasive management in the chestnut areas. “We have a large knotweed problem in a section of the chestnut areas, so my team and I go up there probably two or three times a month to do invasive removal, taking all the vines, making sure all the weeds are gone, just really keeping it clear so they have the best chance of surviving out here,” explains Chris McArdle, NYRP’s Landscape Manager of Northern Manhattan Parks who helps lead the project. “A lot of the times we’re on our hands and knees with pruners just clipping around these trees, really trying to take care of and not damage these trees in the process.”

Thanks to our hands-on stewardship work in Highbridge, innovative research projects like American chestnut restoration can thrive. “Being able to partner with people and groups like NYRP who are also interested in the meticulousness that’s necessary to do science is a key part of my work,” says Hallett.

As next steps, our Director of Northern Manhattan Parks Jason Smith hopes to someday plant the transgenic chestnut, whose DNA is modified through genetic engineering. These trees are currently under review by the USDA along with additional traditionally bred chestnut hybrids to help create a sustainable and genetically diverse population.

Our efforts to reintroduce the American chestnut to Highbridge Park on a large scale demonstrate that through creativity, partnerships, and flexibility, we can both contribute to the conservation of biodiversity and provide park visitors with thriving local forests.

To learn more and get involved in the American chestnut restoration throughout the country, please visit The American Chestnut Foundation.